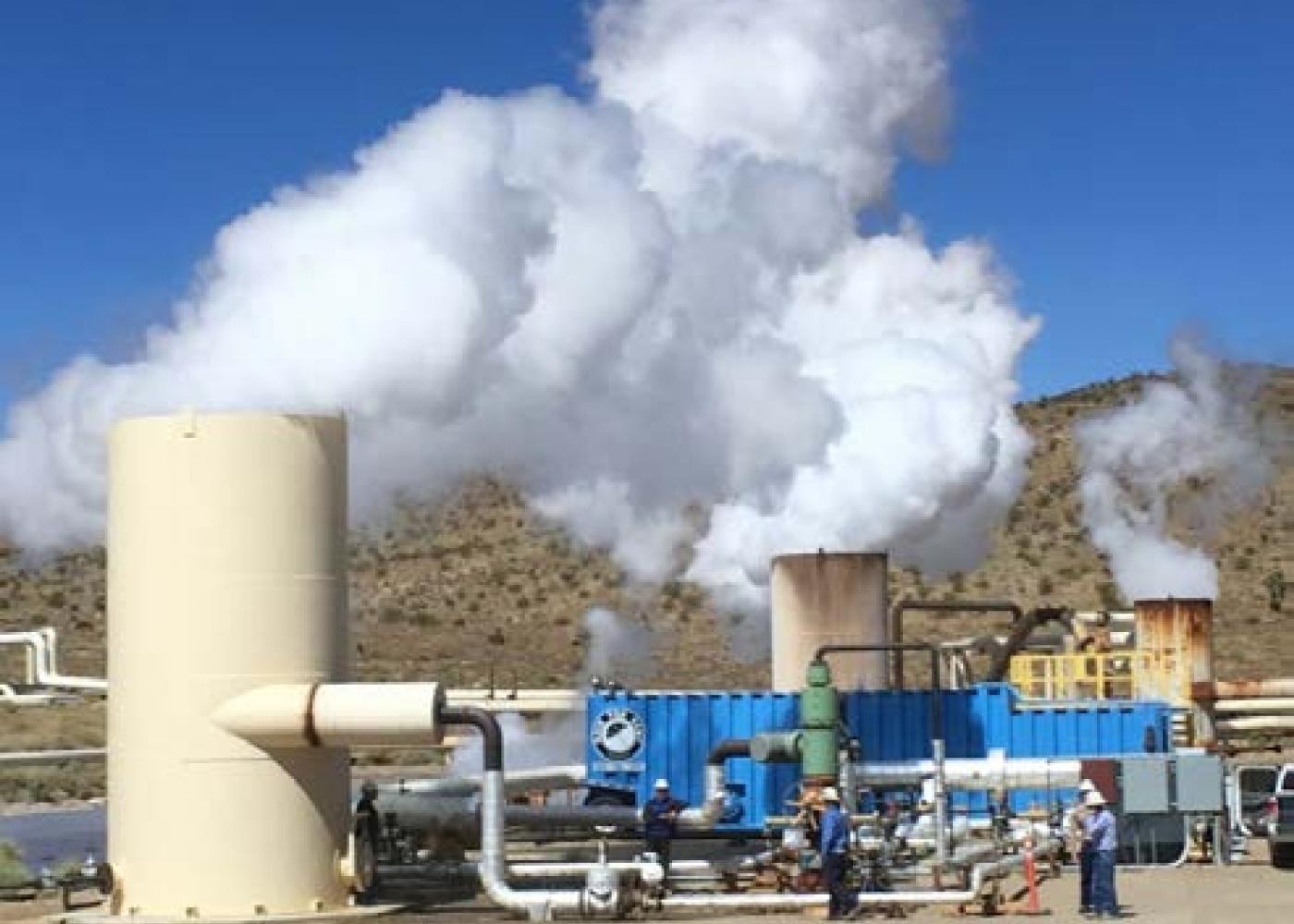 A different approach, closed-loop geothermal (CLG), overcomes permeability issues by circulating a working fluid through a sealed downhole heat exchanger to absorb and transport heat. CLG is a versatile technology that can be implemented in a wide variety of different well pipe configurations using a choice of working fluids (such as water and supercritical CO2 (sCO2)) to optimize site-specific costs and performance.

CLG greatly expands the potential production and consumption of geothermal energy in four fundamental ways: First, closed-loop systems can operate in a much broader range of temperatures and rock compositions, ranging from relatively low temperature sedimentary zones to hot, dry rock formations, than conventional hydrothermal projects. This breadth of viable CLG operating parameters not only increases the number of viable geothermal projects, but also allows the use of high-temperature resources (300°C and above) that dramatically increase power output. Second, closed-loop systems can produce power from previously unproductive geothermal wells and from played out oil and gas wells in hot strata. Third, the baseload and flexible power generation capabilities of CLG can help stabilize the grid with reliable, continuous, sustainable energy, capacity, and ancillary services. Finally, closed-loop geothermal systems can enhance industrial applications, including high-value lithium extraction and hydrogen production, while lowering GHG emissions.

Key environmental advantages of CLG technologies over conventional hydrothermal and EGS include the following:

Figure 1 illustrates that conventional hydrothermal and EGS projects depend on large amounts of water traversing highly permeable rock while it collects and transports heat to the surface as brine or steam. The closed “U-Loop” system depicted on the right does not need subsurface permeability because sealed well “pipes” the heat transport fluid through the hot rock and then to the surface for power generation. 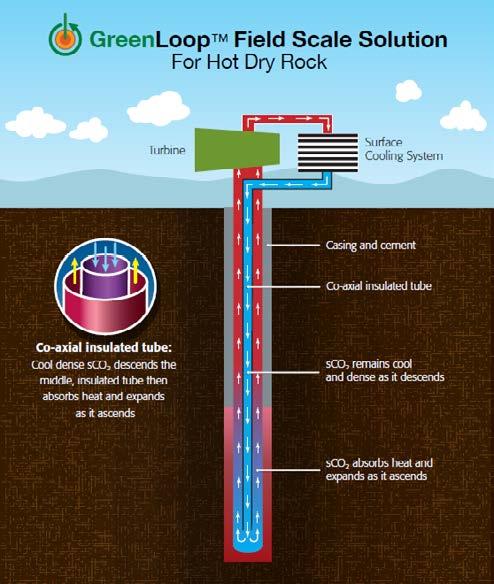 A different CLG well configuration consists of a tube-in- tube assembly (an insulated concentric tube), frequently a vacuum insulated tube (VIT), which can be installed into a single well bore. Heat is absorbed via conduction from the rock through the well casing, and then into the working fluid. Figure 2 shows a deep vertical well with the concentric tube configuration circulating sCO2. 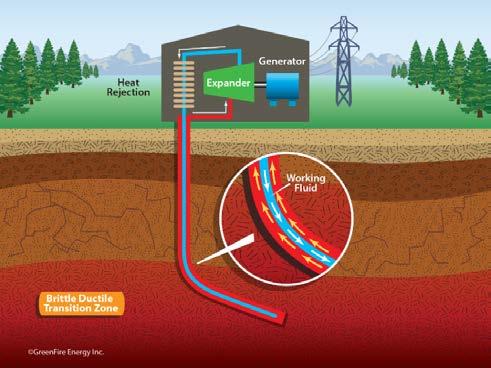 Figure 3 illustrates an alternative highly deviated well design, where the well bore kicks-off directionally from the top depth of the geothermal target zone and angles though the target zone temperature gradient or follows a targeted thermal contour to bottom-hole depth.

Technology from the oil and gas industry is essential to the success of CLG. The industry now drills, completes, produces, and maintains gas and oil wells at depths over 9,750 m (32,000 ft) vertically below surface with bottom- hole temperatures above 500°F (260°C) and/or bottom- hole pressures to 30,000 psi (2,069 bar, 207 MPa). The total horizontal length of a single wellbore can be over 6.6 miles (10,667 m). Wells can be drilled in any direction, including multi-lateral wells or U-shaped wells.

A Demonstration of Closed-Loop Geothermal Power Technology for Applications in Hot, Dry Rock

GreenFire Energy Inc. conducted a field demonstration of a CLG system at Coso, California, using a DHX to extract heat from an existing but unproductive well. The DHX included the insertion of a VIT string into the well with associated surface equipment as shown in Figure 4. Both water and sCO2 were tested as alternate working fluids. 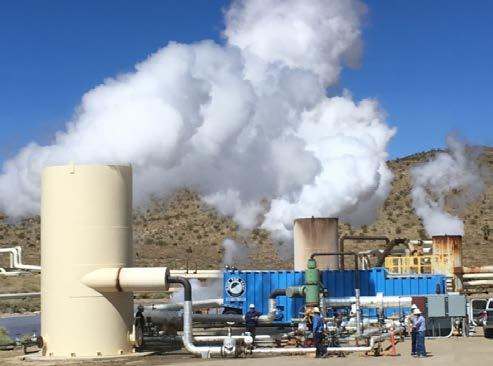 Although power generation is a direct function of thermal surface area, budget constraints limited the DHX to only 1,000 ft long. Obviously, power generation might increase with a longer well. Figure 5 shows the modeled power potential of a field-scale U-Loop system of increasing lengths installed in an impermeable geothermal resource with a thermal gradient of 240°F (120°C)/km. Although convective heat transfer from water in the resource moving across the well would add substantial power, no convection was assumed in these calculations. The industry continues investigating the potential to multiply heat absorption via well configurations that thermally increase downhole surface area. 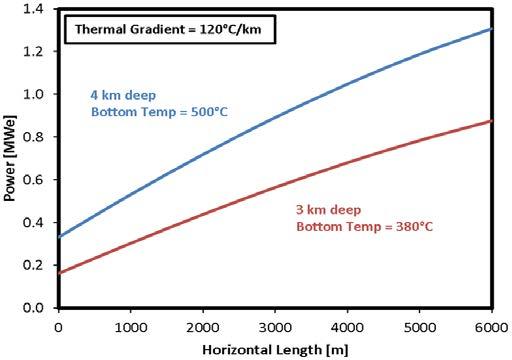 Another relevant question is how much more power could be extracted from the Coso KGRA, using CLG wells, by accessing hotter temperatures that geometrically increase power. Considering current limitations on drilling and materials in combination with an acceptable levelized cost of electricity (LCOE), the potential capacity at Coso with intensive CLG development is in the range of 1 to 2 GWe, compared to its current capacity of about 0.145 GWe.

A better option — CLG well retrofits, such as at Coso — can make unproductive wells generate power with less risk and cost than workovers. This is increasingly attractive as the cost of plugging and abandoning wells escalates. Further, the possibility of fixing new wells that fail with low-cost, closed-loop retrofits effectively mitigates new project risk.

A typical hydrothermal well retrofit solution is illustrated in Figure 6, where a closed-loop, downhole heat exchanger (DHX) is inserted into an existing well. The working fluid circulates from the steam turbine to the bottom of the DHX and extracts heat as it rises in the outer annulus between the well casing and the DHX. 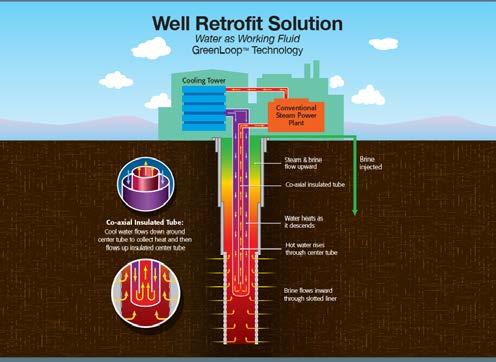 Caption
Figure 6. A Closed-Loop Geothermal Well Retrofit Solution. The DHX fluid can flow either direction, depending on the working fluid. Water flows down the annulus and up the center. When sCO2 is the working fluid, sCO2 flows down the center and is heated as it flows up the annulus.
Retrofit of Oil and Gas Wells for Power Production and Pumping of Suitable Oil and Gas Reservoirs

Thousands of abandoned hydrocarbon wells throughout the world could be retrofit to yield geothermal energy under three different scenarios. First, a DHX can be inserted into a defunct oil well to generate power for oilfield operations as an alternative to diesel generators. Second, geothermal heat might be used directly to pump oil. One potential solution comes from the gravity head pump — a downhole pump powered by a thermosiphon created by the heat of the surrounding rock. This avoids the cost of electricity that would otherwise be used for submersible or surface pumps. Third, a CLG system could be inserted into non-productive oil wells to repurpose them for power generation to the grid.

These applications share the common challenge of transferring enough enthalpy to be cost effective. Oil and gas wells tend to be at the low end of the acceptable temperature range, and strings must be large enough to provide sufficient fluid flow.

Advantages of Geothermal Electricity Generation for Energy and Grid Balancing

Geothermal systems operate continuously, providing baseload and flexible power required for grid reliability, diversity, and electric grid balancing. In contrast, wind and solar projects cause over-generation when they generate electricity in excess of demand. This oversupply not only causes curtailment of power plants and falling wholesale prices, but also requires substitute and extra backup resources for ramping and generation when wind and solar are unavailable. This leads to relying on battery storage technologies with unproven duty cycles and uncertain lifetimes.

CLG can reduce the high cost of clean hydrogen while improving safety. Using geothermal energy for hydrogen production is doubly attractive, avoiding the use of natural gas as feedstock and as the energy source. Two types of CLG processes are feasible:

CLG can improve the efficiency of a wide spectrum of hydrogen production methods:

Lithium is classified by the Department of the Interior as critical to U.S. national security and the economy. A high percentage of the world’s lithium supply comes from brines, which offer cost advantages, as well as the following: