(Sacramento, CA) August 24, 2020 — The rolling blackouts on August 15th and 16th took many Californians by surprise, forcing millions to fend without power during the already challenging conditions of a heatwave and a global pandemic. In response to these broadscale deenergizations, Governor Gavin Newsom, in a letter dated August 17th, requested that the California Energy Commission (CEC), the California Public Utilities Commission (CPUC), and the California Independent System Operator (CAISO) immediately review “its resource adequacy requirements, existing procurement plans and demand response programs to ensure they provide the needed foundation for reliable power.”

Governor Newsom urged the energy regulators to “do more to ensure reliable service and to safeguard California’s energy future.” This is a clear call to action, and the geothermal industry stands ready to do our part to immediately contribute to the stronger, more resilient foundation for reliable power that California desperately needs.

While the CEC, CPUC and CAISO acknowledged in their response to Governor Newsom that a full investigation into the root cause of the blackouts would take time, a few things have already become clear. First, California’s commitment to clean energy in no way contributed to the rotating outages, as expressed by the regulators in their response to Governor Newsom. And second, when power demand was needed the most, geothermal power was delivered unabated, as seen in the CAISO supply chart below. 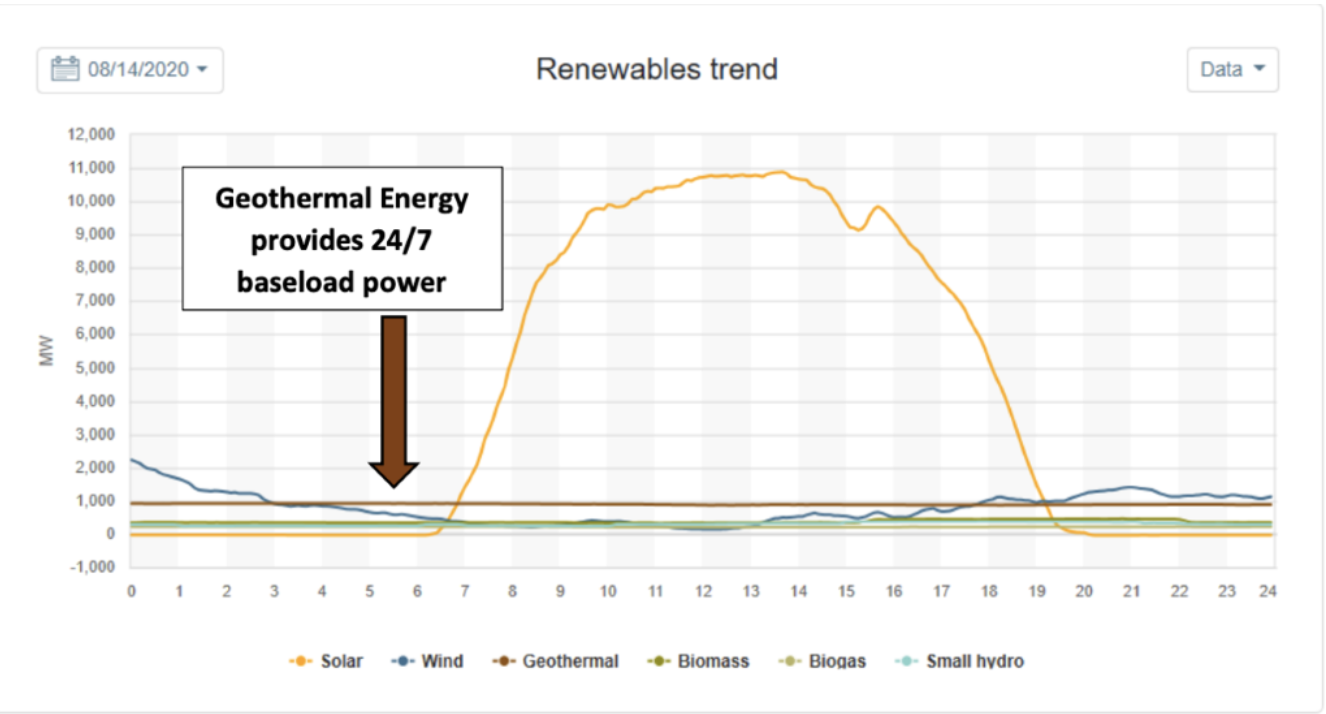 During the peak demand times on Friday and Saturday that caused the rolling blackouts, all of California’s geothermal power plants continued to produce 24/7 baseload clean energy, without interruption, regardless of their location in the state. To deliver power during these peak times, like the record summer heat we are experiencing, we need resources in the mix that can remain fully available 100% of the time. The geothermal industry is proud of our ability to deliver just that. Unfortunately, geothermal energy makes up only 5% of the state’s energy portfolio. It is clear by looking at the energy data of the past week that additional geothermal energy would have mitigated the energy shortfall that caused the blackouts.

To be clear, this crisis has been years in the making, with procurement decisions made during the past decade laying the groundwork for the capacity shortfall experienced last week. We Geothermal Energy provides 24/7 baseload power need strong leadership and direction on procurement to ensure this problem does not continue to repeat. The 2018 IRP process in California called for 1700 MW of new geothermal generation in the state by 2030 to meet the state’s climate and reliability goals; however, no concrete action has been taken to realize this goal. As a result, although there are promising signs of new developments in the industry, it has been nearly a decade since a new geothermal plant came online in the state. Realizing the IRP’s guidance of adding 1700 MW of reliable, clean power from geothermal could have made a world of difference during the rolling blackouts.

As our energy regulators review the state’s energy portfolio in the wake of this week’s shortfall, the geothermal industry stands at the ready to fill the gaps.

About the Geothermal Resources Council

Founded in 1972, the GRC is a California-based, non-profit, 501(c)3 corporation. It is the world’s largest direct-membership geothermal professional and industry association and has an international footprint. The GRC ‘s mission is to champion the geothermal industry by providing education and robust information. For more information, please visit www.geothermal.org.